Driving Under the Influence.
Of a sandwich.

Might I just advise: as well as adhering to the 'Dont Drink & Drive' rule (as well as the one about not driving after having taken drugs/medication)
'Don't Eat & Drive!'
Yesterday afternoon hubby & I were driving back from having visited my mum in Bristol. I was taking my turn at driving us home since hubby had driven us down there. Before we left, Mum made us some ham and coleslaw bread rolls to eat on the way back, since we were leaving right on lunchtime. We'd got about three-quarters of the way home when hunger struck and we each tucked in to half a roll each. I remember at the time thinking that it may not be a good idea, seeing as bread and I seem to have a love-hate relationship (I love it, the band hates it most of the time, but not always) and that I must chew, chew, chew and eat slowly. Trouble was, I only remembered that as I was about to polish off the last mouthful. Needless to say, I got stuck. At first it was just uncomfortable, and I hoped and hoped it would pass through. But, unfortunately, things became increasingly more painful and I realised, from past experience, that the only thing to do was to get rid of the offending morsel. So, from scooting along the M4 at 70mph (never faster, of course...) I had to make a rapid pulling-over manouevre onto the hard shoulder, leap from the car and make especial and delightful use of the grass verge.
Let that be a warning to us all of the dangers of Driving Under the Influence!
Posted by Justine at 13:56 5 comments:

We Bought a House!

Apologies for this post for two reasons 1) it is not in the least bit band/weightloss related; 2) those of you who read my other blog will see it is the same post, almost word for word...

For the last few months we have been house-hunting. We have looked near and far, we have ummed and ahhed over locations, we have veered from town, to village, to hamlet, to middle-of-nowhere isolation, we have made (unsuccessful) offers on four houses and now, finally, we have had an offer accepted! If all goes to plan, soon we will be the proud owners of a house in the village of Hinton St George, Somerset (population 404; soon to be 407...) Same photo as previous blog, not of our house-to-be unfortunately!)

This is a momentous occasion for the Family W who have procrastinated and prevaricated over moving to 'the countryside' for several years now; we have become a laughing stock amongst friends as we would say 'The current plan is to move to Devon'; then the following week, 'We think we might move to Herefordshire'; next week 'Well, hubby was thinking of applying for a job in Australia'; then we thought we might stay in Henley-on-Thames, then it was somewhere else, then somewhere else, then.... you get the picture. But not anymore, now we can delete all those 'saved searches' on Primelocation and Right Move (yes, probably best to delete them before we see 'the' house in the Outer Hebrides and have to start house-hunting all over again...)

I'm afraid I can't actually add any details/photos of the actual house we are buying as the estate agent didn't even get round to drawing them up before we agreed to buy the place. We are hoping that they will send some photos to us soon so that we can get some idea of what the place looks like - it's a four-hour round trip to get there otherwise.
Posted by Justine at 15:08 12 comments:

Yesterday, hubby, DC, Granny & I went for a trip to Somerset to look at some houses and to pay a visit to our relatives C&C who live in gorgeously lovely Sherborne. The house-hunting is an on-going saga due to us being unable to decide where exactly we want to live - makes life a lot more difficult when you can't even narrow it down to a county, let alone a town or village. Anyhoo, yesterday was the turn of Somerset and we saw three houses, one of which we absolutely loved, one of which we didn't much care for, and the third which we didn't really like but which has a wonderful garden and is in a village that we would really like to live in and in which family houses don't often come to the market. Decisions, decisions. It's the 'heart' house or the 'head' house.

But, to get to the point of this blog post. After having seen the third house in the gorgeous village of Hinton St George (above), we toddled along the road to Dorothy's Tea Room where I ordered a pot of coffee and a slice of coffee and walnut cake. And, here's the thing,
I COULDN'T EAT ALL OF THE CAKE
It wasn't a giant slab of a piece, it was just a standard slice of sponge cake with butter cream, but I couldn't finish it. That has never happened to me before. I NEVER leave cake. But this time, I just had to. And, it actually felt good!
Posted by Justine at 14:32 3 comments:

Finally I can post comparison photos becacause, finally, I've got down to 230lbs! Yes, overnight, due to the wonder of the fill and not being able to eat much, I lost 2lbs! 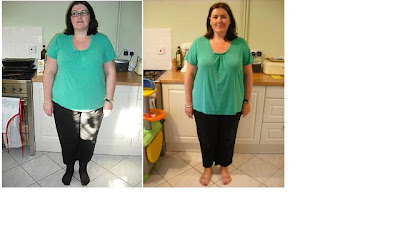 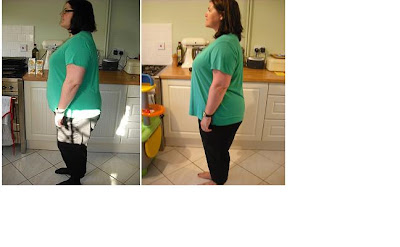 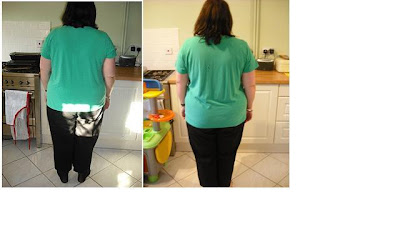 And here are a couple of larger versions of the first photos to give you an idea of how pleased I am with myself and the band, versus how dreadful I looked a few months ago! 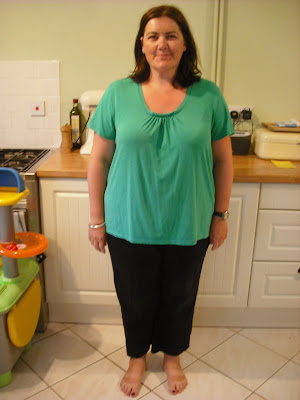 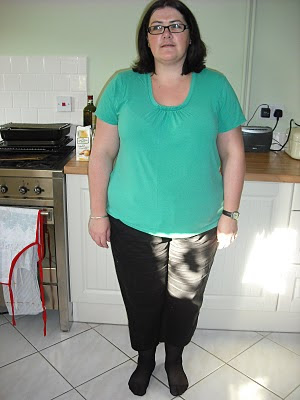 So, I hit my new lowest low of 16st 8lbs two weeks ago. And, right up until yesterday, I didn't see that darn number again. Not because I'd dropped below it and was celebrating losing even more, but because I'm made of rubber and have been bouncing around: 16.9, 16.10, 16.9, even 16.11 at the beginning of this week for heaven's sake (although, admittedly it was TOM.)

Thank goodness that my inner workings and the scales decided enough was enough and brought me back to 16.8 yesterday and today.

Today I also went for a fill. I thought after the last fill I was getting close to my sweet/green spot, but it became clear a week or so ago that yes, I may be close, but I'm not quite close enough. I know that I'm still able to eat too much in one sitting and I'm getting hungry too quickly between meals and thus am on the hunt for snacks (usually cake, biscuit or chocolate-shaped snacks.) And the fact that I've only lost 2lbs since my last fill four weeks ago, seems to corroborate that.

Since the fill at 10am I've had two mochas (one with whipped cream - what the heck, I needed the calories, I was starting to get the shakes!) and a large peach yoghurt. Hubby has cooked a wonderful-smelling chicken tikka massala for himself and my mum who's staying with us for a few days, and I'm probably going to have some of the sauce and a couple of spoons of rice in a bit - just to see how it goes down, and because the smell is making me hungry!

Fingers crossed this fill will kick start the next phase of weightloss... 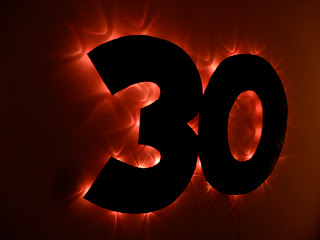 Yay! Last Thursday the scales were kind to me and I'd lost another pound - making 5lbs in five days, four of the pounds that I'd gained and a little extra one for luck!
16st 8lb - 232lbs - BMI 38.6
(just two more pounds til I take some comparison photos!)
That makes a grand total of 30lbs since I started on this weightloss journey back in mid-January. I know my rate of loss has been much slower than for many other bandsters, and there have been moments when I wondered whether I had done the right thing when the weight seemed to be going nowhere fast, but right now it feels like I've found my sweet spot, and long may it last!
Is it just me though, or do you find yourself thinking 'Oh, I've only lost 30lbs' but when you'd lost, say, 20lbs and saw that Mrs X has lost 30lbs, you'd think 'WOW! 30lbs! I wish I could lose that much.' So, of course, now I've lost 30lbs, I'll be thinking to myself 'Ms Y has lost 40lbs, wouldn't it be sooooo great to lose that much' and 'Mr Z lost 30lbs in three months, why did it take me nearly five?'
But, quite honestly, right now I am SUPER chuffed to be weighing in at 232lbs (probably a LOT happier than I was when I weighed that much on the way up the scales!)
Posted by Justine at 08:05 10 comments:

You Gain Some, You Lose Some

Check me out, I've lost 4lbs since Saturday.

Unfortunately, it's not quite as good as it sounds.

Yes, I've lost 4lbs, but it still only takes me back to my lowest weight of 16st 9lbs.

Would you believe that somehow between Friday morning (when I weighed in at 16.9) and Saturday morning I'd managed to put on 4lbs? Thus Saturday I weighed in at 16st 13lbs. How did that happen? I cannot believe I shovelled 4lbs of food/liquids into my cake-hole in 24 hours (well, less if you count the fact that I was asleep for 8 hrs.)

So, 4lbs miraculously glues itself to my body overnight, but does it equally miraculously fall off the following night? No, of course it darn well doesn't. GRRRR. It takes another 4 days to come off. Humph. There'd better be another 1lb gone tomorrow morning or I'll be mad!
Posted by Justine at 13:00 3 comments: